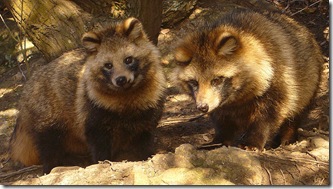 The picture shows a pair of Tanuki,  Raccoon Dogs, a species who suffer worse than most from the global fur trade, especially on Chinese fur farms, where there are no animal welfare regulations at all in force.

St. Bonaventure, building on Francis’ personal love of nature and the Incarnation of Jesus, saw the "traces" or "footprints" of God in all things. The whole world was also the “incarnation” of the God mystery, and the very “Body of God.” Jesus was the microcosm of the cosmos, the hologram of the whole, as it were! (See Colossians 1:15-20.)

The "journey of the mind to God,” as Bonaventure put it, was to learn how to see the unity of all being, how to listen for the partially hidden God, and how to honour the footprints that were everywhere evident once you could see.

The result was a life of gratitude and reverence, non-consumption, and simple joy—while still living a busy life in the world! These were the hallmarks of Franciscan spirituality.

Richard Rohr, adapted from Radical Grace: Daily Meditations, p. 172
(Source: “To Be and to Let Be,” from Catholic Charismatic)

When we realise, as St. Bonaventure did, the oneness of all creation. we come to see that we cannot see ourselves over against creation, as though it was a possession of ours to use or abuse according to our whim. Adam was put into the garden to take care of it (Genesis 2:15) not to pillage it.

We are all connected, we humans, by our common status as creatures; but so is the rest of creation connected to us, and we to the rest of creation. St. Francis saw this. He addressed the wolf of Gubbio as brother; in The Canticle of the Creatures he addresses the sun, the wind and the fire as his brothers; the moon, the water and the earth as his sisters. If the creatures, animals, vegetables and minerals alike, are our sisters and brothers, should we not care for them gently, helping them to be truly what God has made them to be?

This unity is also the ground of our praying: we pray as one with the whole broken, suffering creation, for we know “that the creation itself will be liberated from its bondage to decay and brought into the glorious freedom of the children of God.” (Romans 8:21 NIV)

I didn't know anyone else knew about tanuki! Tanuki is actually the Japanese word for the raccoon dog. Prize calligraphy brushes are made from their tail fur. The nuns at the college where I taught
told me a few tanuki used to come by their kitchen for handouts at night. They are indeed an endangered species.

Tanuki are also a symbol for the good life in Japan. Every bar has a rather debauched looking tanuki statue at their door. In my travels, I encountered a place that sold all manner of tanuki statues.

At St. Bonaventure's University in New York State (where my friar friend teaches), they teach a seminar course on Bonaventure's theology to freshmen. I should think they included his writings on caring for the earth.