As if in answer to my thoughts earlier today, this just arrived from The Merton Foundation in their weekly email:

If we want to be spiritual, then, let us first of all live our lives. Let us not fear the responsibilities and the inevitable distractions of the work appointed for us by the will of God. Let us embrace reality and thus find ourselves immersed in the life-giving will and wisdom of God which surrounds us everywhere.

I think I am all too prone to "fear the responsibilities and the inevitable distractions of the work appointed for [me] by the will of God."

I'm not sure if saying, "Once bitten, twice shy" actually amounts to a sin in itself, but it can most certainly lead to missing the mark, which is what the OT Hebrew for sin means, after all. "God did not give us a spirit of cowardice, but rather a spirit of power and of love and of self-discipline." (2 Tim 1:7)

This has been a good but troubling week. I'm still struggling with this question of sine proprio - without possessing, as I think it ought to be translated.

It's remarkable how, every time I think I've decided that my call is just to prayer, something else comes up. Only this week the Lord did it again, and I've been asked by two of the people whom I most respect as Christians and as friends to consider taking a quite significant step in terms of ministry. It would be very much what I chose to make it (at least, that's what they say!) but it would involve a fair bit of, well, stuff, as Wimber used to call it.

I think I'm getting caught in a trap of my own making, really. I have been praying so much for this community, that we'd be shown how the church can most effectively serve this rural yet deprived area, with all of its very disparate areas of need, and its uniquely rural forms of alienation... I've always said that one has to be prepared to be at least part of the answer to one's own prayers...

Now, is my longing (a longing St Francis had throughout his life) just to be alone with God, to be close to him, near him, to know him more and more, something that, however good it may be in itself, is ultimately selfish, akin to the disciples' longing to make dwellings on the Mount of Transfiguration?

Judy's sermon yesterday on John 15 struck me all of a heap. She said that when we do abide in the vine, thoroughly, we don't have to struggle to find things to do to serve the Lord. We just have to live in the situations in which we find ourselves, and respond. Respond out of that ingrafted vineiness that is the life in Christ, respond out of the love with which he has filled us, and in which we abide. Let it overflow. Don't mind about the mess. Let it slop out all over.

Perhaps I am being called to risk more of myself, not to protect my time (which half the time I then waste...), not to possess even that. Sine proprio as radical in its own way as Francis' and Clare's physical poverty?
Posted by Mike Farley at 9:15 pm No comments: 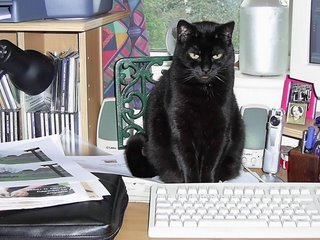 I did promise to post a picture of Figgy, the contemplative cat. This is she, in typical pose! (I hate to admit it, but that's my desk in typical pose as well...)

A special deformity of conscience?

There are crimes which no one would commit as an individual which he willingly and bravely commits when acting in the name of his society, because he has been (too easily) convinced that evil is entirely different when it is done ‘for the common good.’ As an example, one might point to the way in which racial hatreds and even persecution are admitted by people who consider themselves, and perhaps in some sense are, kind, tolerant, civilized and even humane. But they have acquired a special deformity of conscience as a result of their identification with their group, their immersion in their particular society. This deformation is the price they pay to forget and to exorcise that solitude which seems to them to be a demon.

This quotation from Thomas Merton underlines what I was writing about in my 'E' Word post the other week. We, as Christians, the very people who ought to be immune to this sort of thing, practice it regularly as part of our denomination identity. In point of fact, it's very rare these days that we do it on racial grounds, but when we come to matters of conscience, or worse, matters of sexual identity, then we are right up there with the professionals. Consider the following quote from an Evangelical social concern website:

Really? Should we be free to discrminate against people? Again, I have to refer us to the popular wristband slogan, "What Would Jesus Do?"

Now remember, the Bible is far clearer about the only rightful sexual relationship between a man and a woman being within marriage than it is about homosexual relations. Yet, do we find Jesus "discriminating against" adulterers? Remember, he let one go off to act as the first recorded evangelist even before she had straightened out her tangled sex life (John 4:28-30) - and he saved another from the punishment decreed by the Law of Moses (John 8:3-11) using the extraordinary words, "Neither do I condemn you. Go your way, and from now on do not sin again." Forgiveness and counsel, even trust for ministry. I don't see discrimination there.

Remember, I'm writing about adultery, the only cause for which Jesus permitted divorce out of hand. A capital offence, according to the Law. Jesus said plenty against adultery, yet when confronted with actual adulterers, women adulterers at that, against whom his culture discriminated most rigorously, he behaved with the most astonishing love and generosity. About homosexuality he said not a recorded word, for or against; and yet we claim Scriptural warrant (a warrant which on careful analysis raises all manner of exegetical and hermeneutical questions - but that's another issue altogether - read this for one interesting point of view) to behave more harshly to homosexuals than Jesus did to adulterers. If anything qualifies as an example of Merton's "special deformity of conscience," I reckon that does.
Posted by Mike Farley at 8:42 pm 1 comment:

People usually translate the Latin phrase sine proprio as "without property", or "poverty". But as Francis of Assisi used it, perhaps a better translation would be "without possessing".

Gordon Plumb, in an article in the Third Order Chronicle for Summer 2003, remarks that the words "... refer rather to a way of living without grasping (and are thus far more about attitudes and values than about intrinsic wealth or the lack of it)."

I've been increasing being challenged recently by the thought that God's call on my life is to prayer, and that my own Franciscan vocation is probably to be understood, at least in a great part, as living sine proprio anything else. There has been a process of stripping going on here that dates back at least to that occasion some years ago when I really asked God to let me know his Son, really know him, before anything else. It's since then that this has been going on, that everything I've tried to do that isn't at least in some sense prayer has just come to bits in my hands, to the point that I'm almost scared to touch anything in case I break it.
After all, every "career move", whether in the world or in the church, has fallen to nothing in ways that surely bear the imprint of God's hand, his holy and paradoxical way doing things that is so alien to us: "For my thoughts are not your thoughts, nor are your ways my ways, says the LORD" (Isaiah 55:8)

By now, the challenge is acute, almost a daily pain. It wakes me in the night; all my thoughts and desires are confronted by it, measured against it. It will not go away.

What I need to do now, I suppose, is to try, with the help and discernment of my Franciscan brothers and sisters, not to mention (as always!) Jan, to find out how this is to be lived practically. Following Francis following Christ is always an entirely practical exercise, however ridiculous that may seem to the average pair of eyes in the world!
Posted by Mike Farley at 7:33 pm 1 comment:

I see it's over a week now since I posted here, and I know I've been a bit remiss.

I've been thinking, or at least attempting to think. I know there are connections, and if I could see what they are, I could make sense of something that's itching at the edges of my mind. The trouble is, I don't think I'd like that sense very much.

Anyway, I'd better tell you some of the things that have been flittering about, and just maybe writing them down will help put things into some sort of order at least. OK, let's make a list:

What's going on here? Why are things polarising like this? What is going on in the spiritual realm to give rise to effects like this among us creatures of flesh and blood? Remember, "our struggle is not against enemies of blood and flesh, but against the rulers, against the authorities, against the cosmic powers of this present darkness, against the spiritual forces of evil in the heavenly places." (Eph 6:12) Paul counsels us to "take up the whole armour of God..." (v. 13) and the very first part of that armour, as Paul describes it, is the belt of truth, and the second is the breastplate of righteousness.

Our prayer needs to be for truth and righteousness - or justice. At the beginning of Prayer Week 2006 let's remember that. Remember "...we live as human beings, but we do not wage war according to human standards; for the weapons of our warfare are not merely human, but they have divine power to destroy strongholds. We destroy arguments and every proud obstacle raised up against the knowledge of God, and we take every thought captive to obey Christ." (1 Cor 10:3-5)

Let's pray for truth and justice, in the world and in the church - but let's be prepared, like Paul, to stand up for them as well, and, if necessary, to take the consequences as God gives us grace (2 Cor 12:9) to allow his strength to be made perfect in our weakness...
Posted by Mike Farley at 8:01 pm No comments: