Hidden and disguised by ordinariness…

To live a life of prayer in the world, hidden and disguised by the ordinariness of our outward appearances and circumstances makes us a ‘hermit in community’. Prayer makes our enclosure for us and we are naturally protected from over-involvement with outer things because we have come to know that those things can never give us fulfilment. We sense when to withdraw from, to be moderate with, outward activity. This is not a discipline imposed by will-power, by our own choice, but an attitude to life that becomes an intuitive response to the call to be silent and to wait on God. There is a sense in which one attains to a great freedom and liberty by not having to rely on outward structures. A hermit in community is not necessarily solitary but he/she will have to find their own (idio-rhythmic) rhythm of life, which is always unique for each person and will allow time for solitude, silence, prayer, reading and study…

I hope these few further words from Georgina Alexander’s excellent book will speak more clearly than I have been able to in my own unaided words to those who will have been puzzled, even hurt, by my increasing withdrawal from some areas of church life, especially the more exuberant and public ones. It’s important to emphasise that not only is this “not a discipline imposed by will-power, by our own choice,” it isn’t imposed by the will or influence of anyone else. God is doing this; it is his call. The last few weeks, as I explained earlier, have been unlike anything I can remember, and all I can do is attempt to be faithful.

There is such a powerful sense of God’s love surrounding me, of being held in the palm of his hand, and – I say this with some trepidation – of at last being in the centre of his will, at last being where he has called me to be. All that matters is Christ; all this has somehow to serve his Kingdom, to be some kind of channel of his mercy…

“Not to us, O Lord, not to us, but to your name give glory,
for the sake of your steadfast love and your faithfulness.” (Psalm 115.1)

We go to God from Light into Darkness…

Very truly, I tell you, unless a grain of wheat falls into the earth and dies, it remains just a single grain; but if it dies, it bears much fruit. Those who love their life lose it, and those who hate their life in this world will keep it for eternal life. Whoever serves me must follow me, and where I am, there will my servant be also. Whoever serves me, the Father will honour.

One day I was standing in my room doing nothing in particular when I suddenly felt as if ‘something’ had fallen off me. It was as if I had been wearing a warm and protective overcoat and it had suddenly disappeared. My first reaction was to try to get it back on again, but I didn’t know what it was that had fallen off or where it had gone… it was a time of being unable to ‘do’ anything by an act of my own will-power. I could fulfil all my duties and obligations regarding other people but when I had time on my own it was as if there was some obstruction that prevented me from making up my mind, and I would dither about, wanting to ‘do’ something but not knowing what it was. It was as if there was an invisible barrier in front of me and whichever way I looked I couldn’t get past it.Whatever I did do, I knew that that was not what I wanted to do. Whatever I had, I knew that that was not what I wanted to have. I didn’t want ‘anything’ but I did want ‘something’ and I knew not what it was…

It is difficult to explain it more clearly but there was a distinct sense of a change of aim and direction that was taking place from the depths within. I knew that it was not a self-organized change but was a result of being in a state of ‘unknowing’ for such a long time… As I said, the significant thing to note is that this was not a self-chosen movement; there was no way in which it could have been self-chosen because it had been guided from a deeper level than that of usual consciousness. It was an insight that had to come from within myself, which explains why no advice from anyone on the outside could have ever helped me, though I might have continued to seek confirmation.

If a man wishes to be sure of the road he treads on, he must close his eyes and walk in the dark.

St. John of the Cross

Mrs Alexander’s book should be required reading for anyone who suspects they may be being called to a life of prayer lived outside the walls of a contemplative community – her description here matches my own recent experience so closely that I could almost have written it myself.

I am finding myself more and more reluctant to post here: not because I wouldn’t wish to stand by everything I’ve written here (well, most of it, anyway!) but because it’s becoming increasingly difficult to find words for what God is doing with me. More and more I find myself feeling that if I have anything to contribute along this path of ours, it is not in what I might do, but merely in being faithful, open, accepting what God gives, accepting the grace and mercy of Christ, without grasping at it; living along this almost transparent thread of only perceiving, of not trying to achieve. Not for the first time, I’m reminded of a Zen saying I read once – and now cannot find – to the effect that it’s only when we have given up seeking after enlightenment that we can become enlightened.

I feel an intense hunger for hiddenness; I long to be like a wren, living out its life deep in an ivied hedgebank, hardly seen among the dense leaves and underscrub. Somehow all this has to do with the heart, too: mine is too full to accomplish anything outwardly, still less to write more for the time being…

When you awaken your heart, you find to your surprise that your heart is empty. If you search for the awakened heart, there is nothing but tenderness. You feel sore and soft, and if you open your eyes to the rest of the world, you feel tremendous sadness. It occurs because your heart is completely open, exposed. It is the pure raw heart that has the power to heal the world.

Chogyam Trungpa, quoted in A Path With Heart by Jack Kornfield, with thanks to inward/outward 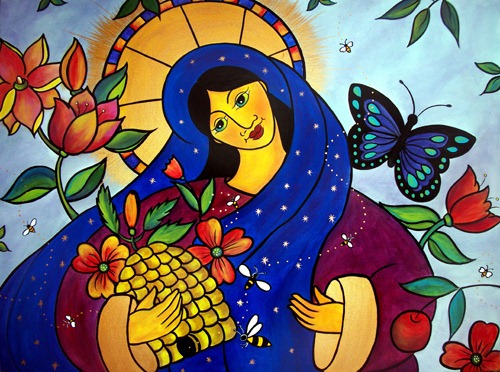 On this most glorious day, when the sea sparkles like moving glass, and the Gospel reading was of Thomas, dear wondering Thomas, making his glorious affirmation of the risen Lord, and a new baby was baptised into the Church at the Eucharist at St Mark’s, it’s good to remember our Lady, the faithful Rose from whom such sweetness sprang! 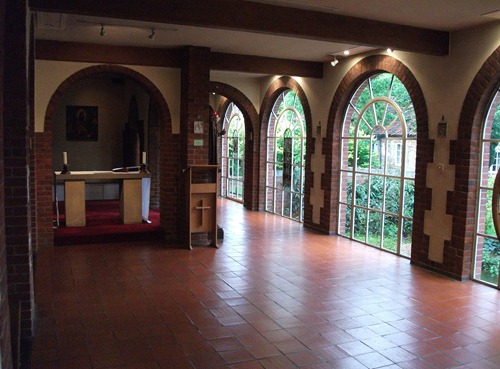 The Chapel of St Augustine, Walsingham

It isn’t easy to begin to describe the TSSF Pilgrimage to Walsingham. The external facts are easy enough to read about on the website, but the experience itself is far less accessible to words or pictures. The lovely buildings, set in beautiful gardens, are well enough known to need no introduction from me. What you don’t see is the sheer sense of holiness that pervades the place. I kept catching myself walking around a corner and feeling like Jacob, who “was afraid, and said, ‘How awesome is this place! This is none other than the house of God, and this is the gate of heaven.’” (Genesis 28.17)

God speaks with a strange clarity in places like this, and yet it is hard to share in such a public way as this the things one hears. Certainly we left Walsingham both knowing very clearly the intensity of God’s call to prayer, and the urgent necessity of our response, which has been strangely echoed in the recent experience of other Christians in Swanage. The true extent of that call on our lives, though, is only gradually becoming clear.

Somehow the Holy Spirit soaks into one with the water of that place, and as Paul says, “God, who searches the heart, knows what is the mind of the Spirit…” (Romans 8.27) It’s very uncomfortable. Increasingly it’s impossible to get away with hiding one’s mind from one’s heart. But God is very gentle, even if he is God…

Happy are those whose transgression is forgiven,
whose sin is covered.
Happy are those to whom the Lord imputes no iniquity,
and in whose spirit there is no deceit.

While I kept silence, my body wasted away
through my groaning all day long.
For day and night your hand was heavy upon me;
my strength was dried up as by the heat of summer.

Then I acknowledged my sin to you,
and I did not hide my iniquity;
I said, ‘I will confess my transgressions to the Lord’,
and you forgave the guilt of my sin.

Therefore let all who are faithful
offer prayer to you;
at a time of distress, the rush of mighty waters
shall not reach them.
You are a hiding-place for me;
you preserve me from trouble;
you surround me with glad cries of deliverance.

I will instruct you and teach you the way you should go;
I will counsel you with my eye upon you.
Do not be like a horse or a mule, without understanding,
whose temper must be curbed with bit and bridle,
else it will not stay near you.

Many are the torments of the wicked,
but steadfast love surrounds those who trust in the Lord.
Be glad in the Lord and rejoice, O righteous,
and shout for joy, all you upright in heart.