I've just revised and expanded the page 'Solitude ' on The Mercy Site ...

I've been thinking a lot about the solitary life recently. I've always been deeply moved by Br Ramon's writings (mainly in A Hidden Fire (Harper Collins 1985) and The Flame of Sacred Love (BRF, 1999)) and I've often wondered how and to what extent a longing for solitude with God could be reconciled with a 'normal' life, with family, work and all the other commitments and interests that go with it.

Haven't come to any conclusions yet, but interestingly, the Third Order of the (Anglican) Society of St Francis has recently issued a supplement to the Manual entitled 'Solitude and Contemplation', discussing the tension in Francis' own life between the contemplative and the active life, and the way that all his life he took periods of retreat that re-energised and re-envisioned him, and ultimately led to renewal throughout the Church in his time. I personally feel that the supplement does not go far enough towards considering the potential integration of the contemplative life with life in the world (cf. The Elder Joseph's essay on the 'Prayer of the Heart for the Faithful Living in the World '), but then perhaps this is outside the scope of a supplement dealing with solitude and contemplation!

I'm planning, with God's grace, and in the time I can find with Jan still seriously ill, to work through The Mercy Site, pruning and reformatting (and sometimes revising) all the pages - some of them have been up for five years now without any work on them, and I think a little sprucing up is in order... I'll post here when each page is done, in case anyone wants to have a look...
Posted by Mike Farley at 11:05 am No comments:

“To properly understand prayer, we have to see in it this encounter of our freedom emerging from the depths of nothingness and undevelopment, at the call of God. Prayer is freedom and affirmation growing out of nothingness into love. Prayer is the flowering of our inmost freedom, in response to the Word of God. Prayer is not only dialogue with God; it is the communion of our freedom with His ultimate freedom, His infinite spirit. It is the elevation of our limited freedom into the infinite freedom of the divine spirit, and of the divine love. Prayer is the encounter of our freedom with the all-embracing charity which knows no limit and knows no obstacle..”

I really am sorry for the long gap in posts here... my Jan has been very unwell, and investigations are continuing to attempt to find out what's wrong. I'll try and be a bit more forthcoming here - the problem is trying to find a balance between respecting the privacy of the situation, and sharing what is after all something that God clearly knows all about, and which may in some way be helpful to any readers.

Pray for us, anyway, please... and that I will find that balance!

The realisation that animals are in need of our mercy, rather as we are in need of God's (though perhaps more deservingly!) is nothing new. It didn't even start with Francis of Assisi...

O God, enlarge within us the sense of fellowship with all living things, even our brothers, the animals, to whom you gave the earth as their home in common with us. We remember with shame that in the past we have exercised the high dominion of man with ruthless cruelty so that the voice of the earth, which should have gone up to you in song, has been a groan of pain. May we realize that they live, not for us alone, but for themselves and for you, and that they love the sweetness of life.

Posted by Mike Farley at 4:36 pm No comments:

The Pope and the Homeless Cats

Remarkable article - go read, forthwith. It fits right in with the story of poor little Lulu...
Posted by Mike Farley at 4:22 pm No comments:

I've discovered an article on the Anglican Society for Animal Welfare site: Loving Our Fellow Creatures by Richard Bauckham.

Do animals have rights? It is becoming quite common to think so. Talk about animal rights follows on, of course, from talk about human rights. Those who advocate animal rights are proposing we extend the idea of rights from humans to other animals. How should Christians think about this? Does the Bible give us any guidance?

This is an excellent, well-argued and thought-provoking piece, carefully supported from Scripture, with a useful list of references. I really do urge you to read it in full. I don't know if Richard Bauckham is a Franciscan, but he'd be very much at home in Franciscan company, of that I'm sure!

I can't help ending with the article's last couple of paragraphs - the picture of learning to worship with the animals is just irresistable...

In my view, the most important way in which Scripture sets us alongside the animals as fellow creatures is its portrayal of the worship of God by all of god’s creation. Modern readers of the Bible sometimes take such passages to be mere poetic fancy. Of course, they do not mean that other creatures worship God in the ways that we do. Other creatures worship God just by being themselves. They exist for God’s glory. Their worship expresses the value they have for God.

The best way to learn to value other creatures is to learn to worship with them, to recover the sense, so powerful in the book of Psalms, that our own worship is part of the worship of the whole creation. In worship we do not stand above our fellow-creatures, but beside them and before the God who created us all. The Bible never suggests that we help other creatures to worship. Rather, a passage like Psalm 148 gives the strong impression that they help us to worship. Coming to appreciate the value they have for God raises our hearts and minds in praise to their Creator. 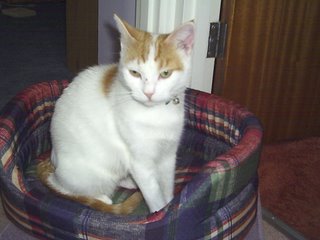 We have a new cat! Her name is Lulu - she's an 11-month old rescue cat, and mad in the best possible way. We've had her nearly a month now, and she and Figgy are getting on really well.

Lulu is perhaps the most loving, people-oriented cat I've known. She follows us everywhere, even to sitting outside the shower mewing pathetically, in case one gets washed down the plughole. She'd been abandoned presumably when she was discovered to be pregnant, and had raised a litter of kittens behind someone's garden shed, so she was very thin and anxious when we had her (her kittens just having all been homed, and Lulu herself spayed) but she's put on weight, become happy and relaxed, and grown the softest, densest coat imaginable.

It really is such a privilege to be able to give a safe home to someone like Lulu - to be able to as it were extend God's love and mercy to a scrap of Creation who'd known far too much of betrayal, loneliness and struggle in her few months of life. Thank you Lord, for little Lulu!
Posted by Mike Farley at 9:15 am 2 comments: