Out into the wilderness...

The Desert Fathers believed that the wilderness had been created as supremely valuable in the eyes of God precisely because it had no value to men.  The wasteland was the land that could never be wasted by men because it offered them nothing.  There was nothing to attract them.  There was nothing to exploit.  The desert was the region in which the Chosen People had wandered for forty years, cared for by God alone.  They could have reached the Promised Land in a few months if they had travelled directly to it.  God’s plan was that they should learn to love Him in the wilderness and that they should always look back upon the time in the desert as the idyllic time of their life with Him alone.

Thomas Merton:  Thoughts in Solitude, pp. 4-5, with thanks to Gabrielle

I love the word, wilderness. I remember hearing it first from my mother, describing patches of waste ground near our home by the sea at Felpham, in West Sussex. I know the Judean Wilderness is not by the sea (unless you count the bit along the Dead Sea, which is pretty unlike the English Channel anyway!) but the phrase always takes me back there, to the dunes and the marram grass, and the salt wind off the grey sea. Somehow it still has that sandy, salty tang to me, fifty-odd years later. and when I read the word in the Gospels, my heart aches for those lonely places along the Sussex coast.

This old photograph I found at the South Downs Shoreline Management site gives something of the feel of the place when I was growing up: 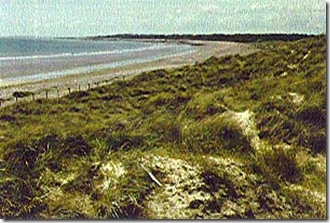 That scene to me is heavenly peace.

Wow, thank you for posting this. It helps to see what helped form you my friend.

Mike, a contemplative and spirit-calling landscape indeed; no wonder your soul aches for it. I enjoyed reading your memories as well.

Thank you for the link, Mike. I'm sorry, but I don't seem to be getting any info on my site anymore as to who has linked to me, so I only find out if I happen upon something myself. I'm glad this Merton passage spoke to your heart, bittersweet though it may have been...

I've been thinking that I need to go and see Felpham again - it's been far too long, and it's really not far along the coast from here.

Gabrielle, I have the same problem, about links. It's good to stumble across them, but you always wonder about the ones you've missed! Bittersweet is good, though, and necessary somehow...

Thank you, Fran. You've helped me decide something. I've been thinking that I need to go and see Felpham again - it's been far too long, and it's really not far along the coast from here. I'll go.